Pageants Freak People out…. Until They Meet a Pageant Girl 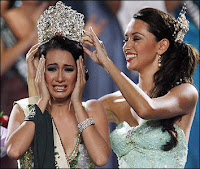 I was  Facebooking  working, when I came across a friend’s (Tajma Hall, Miss Teen Illinois-World 2011), status interesting point of view:
“(I) just watched a Dr. Phil episode about pageant dads. I’ve seen so many talk shows cover pageants and it really bothers me that they only talk about the 3- and 4 –year- olds who do the high glitz competitions, and then they judge all pageants in a negative way based on those. ”
So… Toddlers and Tiaras didn’t do much to help the cause.
The success of the series that showcases pint- sized uber-divas in enough rouge to make RuPaul blush and fanatical stage moms that will do all but cattle prod their kid to perform, wasn’t the best thing for pageants in general. Because it’s the Bible from which the general public cites all things pageant, by association all competitions (wait, Miss America and Miss USA aren’t the same thing?) are grouped into a… less than attractive light.
Or in laymen’s terms: high glitz kids’ pageants tend to creep people out. And because people associate all pageants (Pre-teen, Teen, and Miss) with high glitz kids’ pageants, all pageants tend to creep people out.
But there is hope for the longsuffering titleholders out there!
The spell is reversible and the incantation is simple: just be you (completely authentic) and just be educational (and patient… people say the darndest things).
The high glitz pageant systems are just one arena of a larger (all- be- it campy) industry. The titleholders that you see in your community rarely are from any of those systems (besides the fact that most titleholders that do appearances are Teen or Miss level, not children).
Some of the best experiences I’ve had as a title holder have been basically in becoming a Pageant Ghost Buster and de-creeping people out. Why? Well let’s be real… besides being freaked out, most people think that pageant girls are dumb and fake.  While I have come across a few Pink Robots, I can honestly say that the majority of girls are very real and very accomplished. When I competed in D.C. during college, most of my fellow contestants held day jobs on the Hill or were heading off to grad school.
When speaking to people as a titleholder, my number one comment (besides how obviously and utterly sensational I am… what I say?) was that they just didn’t expect me to be, well… the way I am.
“I just didn’t think you’d be-” This is when a look of guilt comes across their face like a storm cloud on a Care Bear belly…
“That I’d be what?”
“Like real and smart.”
This is usually where I laugh. I wouldn’t see scenarios like this as a time to be offended, but as a time to be complimented (jury’s out on if it’s backhanded or not).  I would be more offended if someone said, “Yea, I expected you to be an air-head robot, and be careful what you wish for.” As a titleholder, I would relish the fact that I could make someone feel a bit more at ease with the industry, and I would love getting invited back to events.
Like with anything, people make assumptions and carry preconceived notions, but they are not immoveable. Just being yourself can be enough to change a mind.
Or you can just call one of those Toddlers and Tiaras moms for back up. O_O